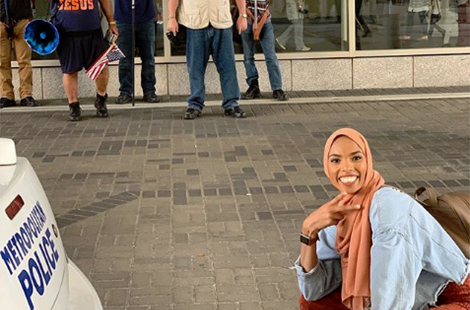 NBC News Staff, April 26, 2019 – A woman who inspired thousands with a photo of herself in a hijab, a wide smile on her face and two fingers raised in a peace sign in front of anti-Islam protesters said Thursday she wanted to “combat their hatred with kindness.”

Shaymaa Ismaa’eel, 24, who is Muslim, said she immediately spotted the protesters when she arrived Saturday for the 44th annual Islamic Circle of North America convention in Washington, D.C.

“I really wanted to combat their hatred with kindness, honestly,” she said. “I wanted them to see my face and simply walking by wasn’t enough.”

Instead, she asked a friend to take the photo, which she shared on Instagram with the caption, “Kindness is a mark of faith. Those who aren’t kind have no faith.”