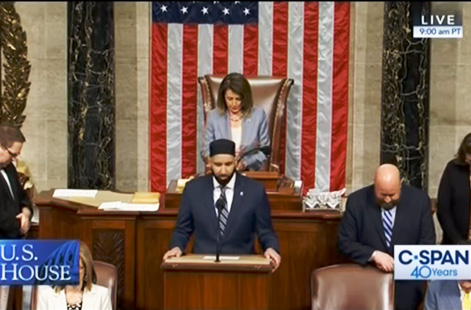 Last week, Imam Omar Suleiman, a member of the ICNA General Assembly was invited by Rep. Eddie Bernice Johnson, D-Dallas, to give the invocation on the floor of the U.S. House. The non-denominational prayer was about peace, unity, justice and truth.

However Rep. Lee Zeldin (R-N.Y.), Dallas Pastor Robert Jeffress and Fox host Lou Dobbs have called him anti-Semitic by misquoting and misrepresenting his past statements.

“Since my invocation I’ve been inundated with hate articles, threats, and other tactics of intimidation to silence me over a prayer for unity,” Imam Omar Suleiman says. “These attacks are in bad faith and meant to again send a message to the Muslim community that we are not welcome to assert ourselves in any meaningful space or way.”

ICNA urges all to confront this blatant racism and islamophobia by calling Speaker Nancy Pelosi’s today at (202) 225-4965.

Let Speaker Pelosi’s office know that you support Imam Omar Suleiman, an internationally renowned Muslim leader who has spent his life fighting bigotry in all its forms. Bad faith attacks that have led to threats of violence against Imam Suleiman should be denounced.

Instead of amplifying Imam Omar Suleiman’s message of peace and unity, anti-Muslim and anti-Palestinian groups have launched a smear campaign against yet another person of color and American Muslim leader in the hope of maligning and marginalizing the Muslim community.

Please email your representative in the U.S. House to support condemn this smear campaign against Imam Suleiman:
https://www.house.gov/